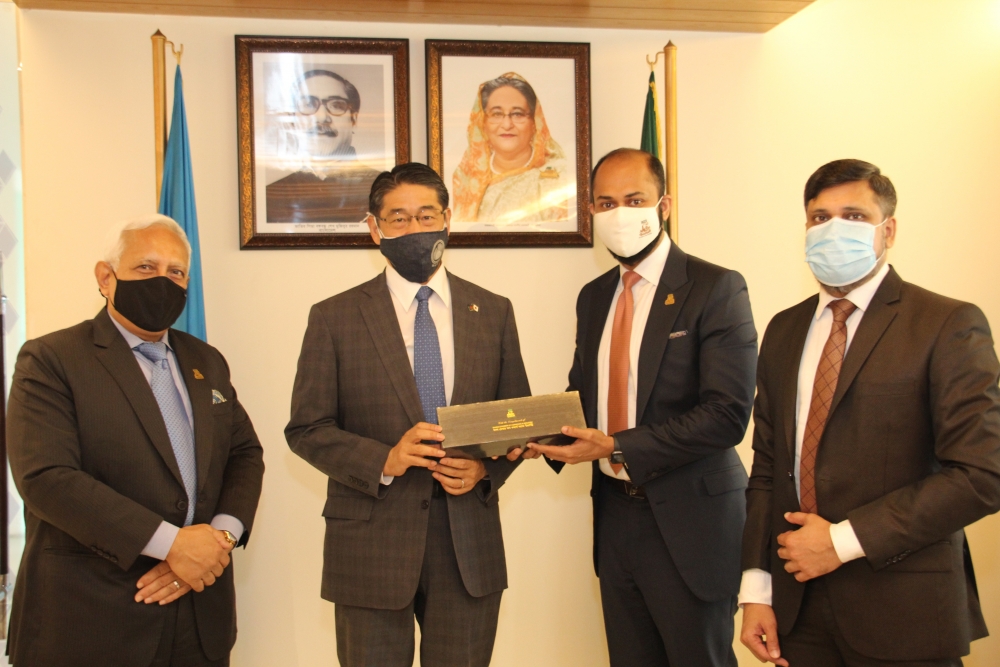 Automotive industry in Bangladesh could be an emerging investment destination for Japanese entrepreneurs, said DCCI President Rizwan Rahman during a bilateral business meeting with the Ambassador of Japan in Bangladesh ITO Naoki held on October 10, 2021 at DCCI.

During the meeting, DCCI President Rizwan Rahman said Bangladesh and Japan has a strong bilateral business relationship since long and thanked the Japanese government for providing COVID vaccine for the Bangladeshi people. He mentioned that in FY2019-20, total trade volume was US$2.92 billion, where amount of export and import was US$ 1.20 billion and 1.72billion respectively. DCCI President also said that, due to pandemic Bangladesh’s export to Japan in 2020-21 was US$1183.64 million, which was quite low than the previous year and hope that it would increase in the coming days. He informed that, 321 Japanese companies are now operating their activities in Bangladesh and in March 2021 the Japanese FDI in Bangladesh was US$ 397.15 million. DCCI President said that Bangladesh mainly export RMG products to Japan and urged the Ambassador to facilitate other promising products for export to Japan. He opined that Japan can play a vital role for skill development in Bangladesh and share technical know-how and train Bangladeshi entrepreneurs. He also thanked the Japanese entrepreneurs who already registered in “Bangladesh Trade & Investment Summit” to be jointly organized by Ministry of Commerce and DCCI from October 26.

Ambassador of Japan in Bangladesh ITO Naoki said that Bangladesh have been able to send a strong message to the world in terms of keeping positive GDP growth even in the pandemic. He also said that the “Japanese Economic Zone” in Araihazar will be able to go for operation by next year and it will expedite Japanese investments in Bangladesh. The Japanese Ambassador said that to sign a FTA a joint study can be conducted with an initiative of both the governments. He also mentioned that smooth customs clearance facilities, import transaction, better infrastructure of EPZ and EZ and skilled human resource will boost ease of doing business. Bangladesh can be the China Plus One investment destination for Japanese companies, he added. He also said that automotive industry of Bangladesh can be a good source of investment. Japan’s Mitsubishi has completed their feasibility study and next year they will take decision on investment in Bangladesh.