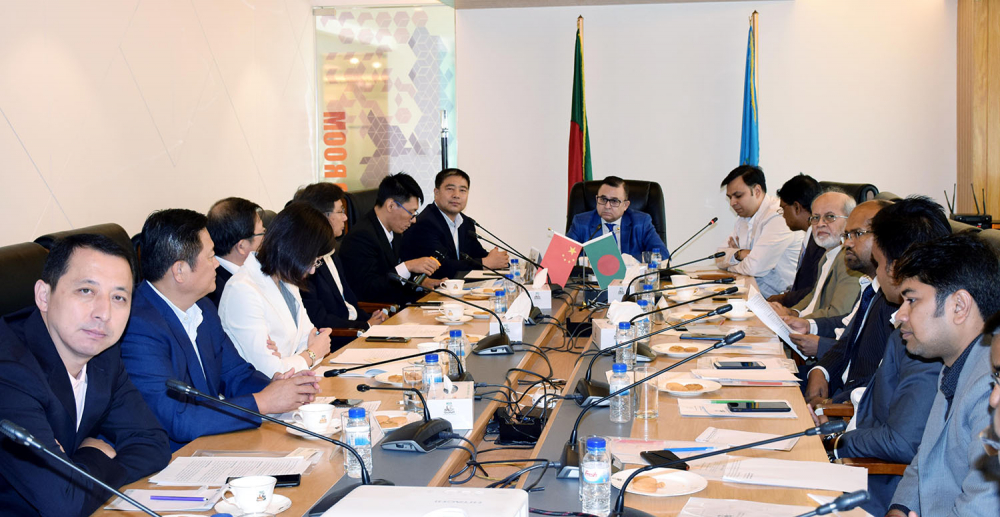 DCCI's Acting President Waqar Ahmad Choudhury said China is the largest trading partner of Bangladesh. During 2017-18, bilateral trade of Bangladesh and China was about USD12.40 billion which is 13.85 percent of the total trade of Bangladesh, he said. But the trade deficit with China reached to USD11 billion in 2017-18. Despite, it is encouraging that the investment synergy between Bangladesh and China is expanding. FDI inflow from China to Bangladesh reached to USD1.03 billion largely in power, apparel and financial sector, he informed. He also said that agro-processing offers immense investment opportunities for Chinese investors as this sector is the 2nd largest export sector of Bangladesh. Moreover DCCI Acting President invited the Chinese investors to invest in high-end apparel, backward linkage of pharmaceuticals, leather and footwear, electronics and automobile sector in Bangladesh.

DCCI Vice President Imran Ahmed offered vote of thanks and said that China can play a vital role in developing South Asian regional trade and investment.

DCCI Directors Enamul Haque Patwary and SM Zillur Rahman and entrepreneurs from different organizations took part in this business meeting. Representatives from eight companies sat with the Chinese delegation for a B2B. A Memorandum of Understanding (MoU) was also signed between DCCI and Liaoning Federation of Industry and Commerce.